I've been busy, so I haven't been able to edit my screenshots or categorise them. I have been playing MapleStory once every few weeks, so I'm still active in a way. Also I've joined another guild, the red tuxedo.

I've announced it before, that there is an anime coming about the world of MapleStory. And a few weeks ago, it launched and I've watched the first two episodes. So far they are not following a straight storyline. Mostly because they are introducing the worlds and the main characters. It's a simple and understandable children's anime and if you love the world of MapleStory and its monsters you can see them now in animestyle, which is pretty nice. I love kawaii things, so I haven't been disappointed about the style of drawing. I think I'll watch some more episodes to see if there will be a more straight storyline.
Posted by Vlien at 20:03 No comments:

I just found out that there is going to be an anime about MapleStory.

This is from Anime News Network:
TV Tokyo has announced that it will start broadcasting an animated series based on MapleStory, the Korean fantasy massively multi-player online role-playing game (MMORPG), on Sunday, October 7 at 8:30 a.m in Japan. The series will take over the timeslot that currently runs Tengen Toppa Gurren-Lagann. TV Tokyo posted the news on Anime X, its anime-centered website for mobile devices. The Japanese game version's maintainer Nexon had previously announced that Madhouse Studios (Last Order: Final Fantasy VII, Vampire Hunter D: Bloodlust) was to animate. Source: Moon Phase

I've added RenaissanceZ, VEGANxTHEIF and XStarSpaceX to the above buddylist. Oddly enough I can't find Nalius in the maple ranking and SirMistik isn't wearing the clothes he usually wears so I won't add him yet.
Posted by Vlien at 23:50 No comments:

Helping others makes me happy! Leveling Up to lvl 65 too!

I was heading back to Ludi, when a girl asked me to help her kill goblins for a broom. I helped her and she famed me and I famed her back :)

At Leaf City I helped a boy and he famed me too :) 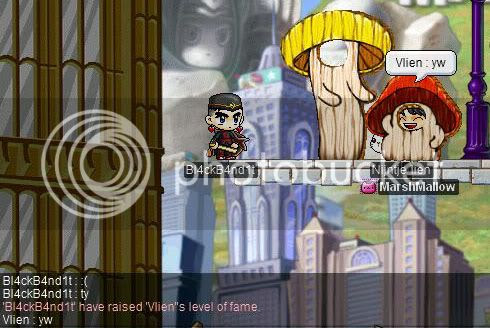 Finally! I finished all the q's in Leaf City and as an award I received the Warrior Throne!

I still had Mana elixers left, so I did the Lita's q again. I partied with a sin, who was also lvl 65. Oh! I almost forget to mention it. I turned lvl 65 today :) 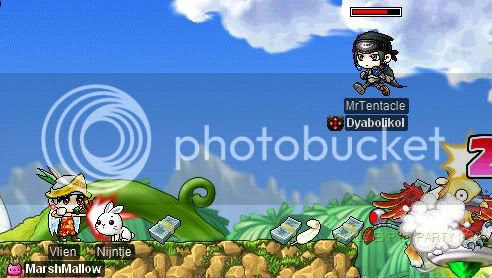 Later XpowermeanX appeared and he joined the party. Check out his cat's name! It confused me when he said sexy so many times in the buddy chat, because I didn't know he was talking to his cat 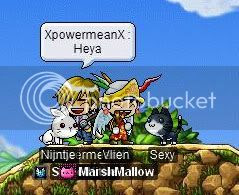 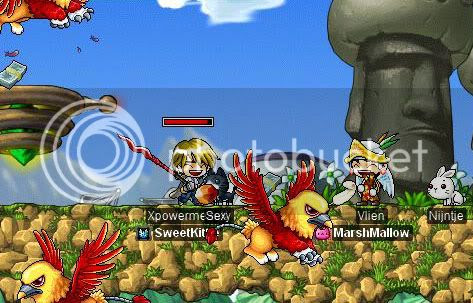 I lost my Michael Wings I partied with someone else, after diner since the sin didn't come back online...

I left the party, when I finished the Lita's q and headed to Kerning City with my lovely chair. Would be nice to have such a comfy chair in real life.

I thought I'd see a buddy fight and play with him, but it turned out. He's afk even though I took an hour break there... He didn't come back...

So I left and went to Florina Beach, deciding to find the black tube at the Turtoise. Only I stopped after half an hour and went back to Lith Harbor, where I met a beginner who asked me a lot of questions. I replied and she had to go after that. 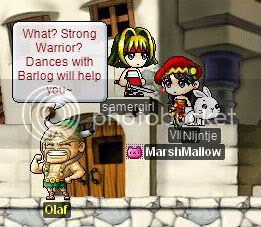 Than I walked back to Henesys. Yes! I walked... I couldn't find the cab... I guess it doesn't exit anymore...

I played with my chair and someone joined me 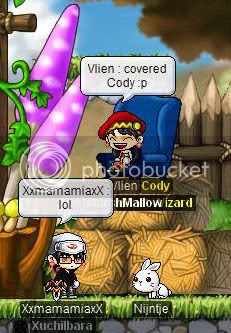 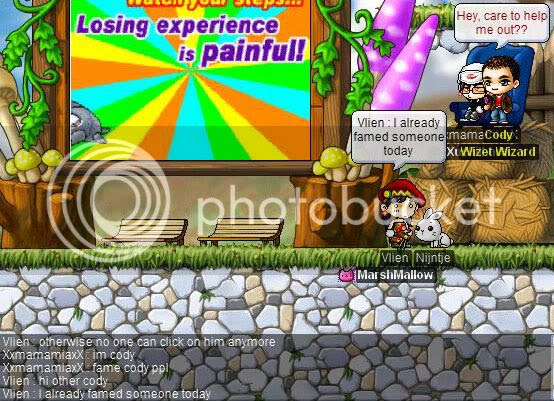 Than I asked him where I could find tubes and surfboards. He replied and we parted ways. 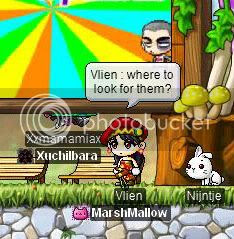 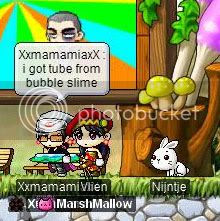 I found this at the Slime Tree filled with green slimes: 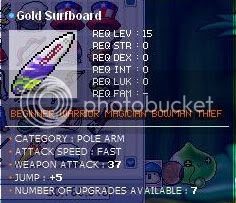 And I found this one at Kerning Subway by the slime bubbles: I was using arrow blow, so I found them in less than fifteen minutes. I was partying with VEGANxTHEIF, who wanted exp and meso. He became my buddy later. 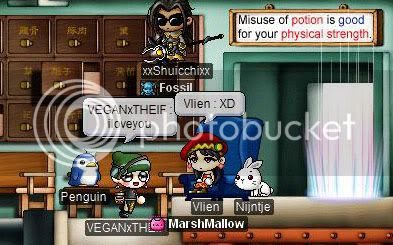 After he left, I saw that the person above us was using his huge chair to sit on. Since it looked funny on top of a drawer from the pharmacy cabinet I decided to do the same. Before I left too.

I came online and I was naked!

During summersale, I bought this Tropical dress and now was the time to wear it. After that I waited for the metro to go to Ludi

I was a bit bored, while doing this q to find Temporal Fragments. Since I have my Maple Crossbow in my inventory and Diamond Arrows for crossbow I used them all.

I was doing the Lita's quest again, because I want to use up all my Unagi's and Mana Elixers to replace it with the elixers, that I can only buy in Leaf City. Since I need to hit Gryphons for 2-3 times I used my chocolates. The damage that I gave was amazing! 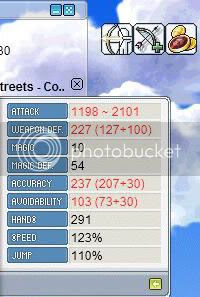 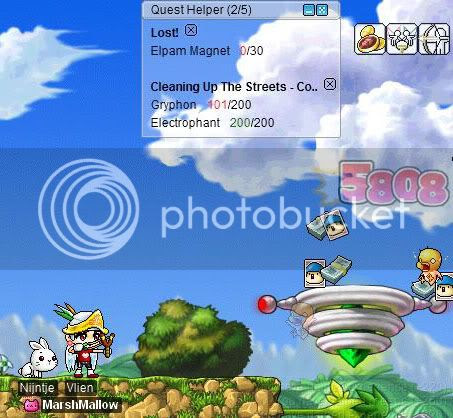 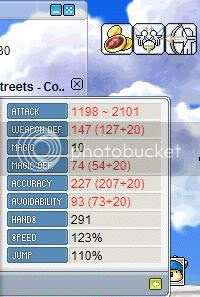 I met Pluechen, while I was there. 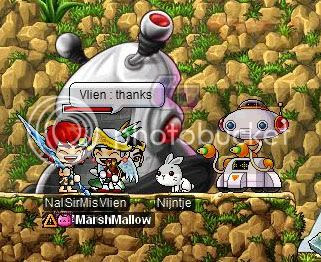 I was partying with SirMistik 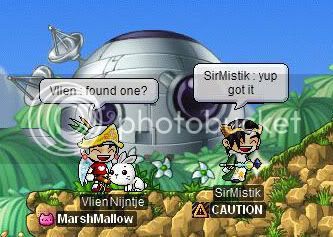 I was alone in the metro... Is this really ch1? Someone did appear after a few seconds. Still it was soo quiet! 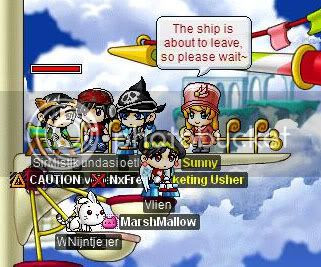 In Omega I gave this to a Bandit:

He was very happy and he even asked me to be his gf. 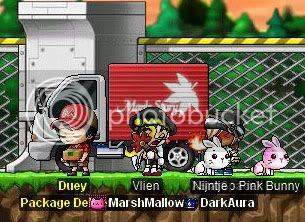 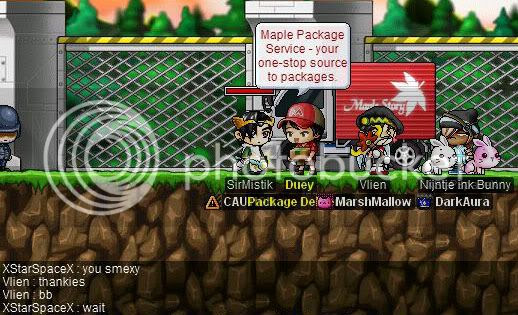 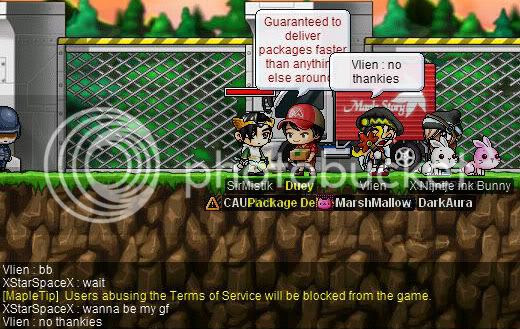 After we finished this q for Elpam, we went back to him and received our awards and another q.

Since the next q told us to go to Ludi, I decided to finish that one another time. I said bb to SirMistik, who's also a new buddy.

I reached my record fame today. I was famed and I received fame from quests. 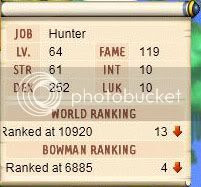